Who Speaks For You? 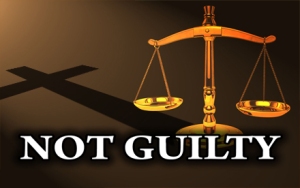 God forbid that you should ever be charged with a capital crime, but if you were, won’t you consider yourself blessed to be represented by a lawyer who has never lost a case? Having a lawyer with such superior legal experience and knowledge of what it takes to obtain a “Not Guilty” verdict would be the best thing that could happen to you. It would be highly advantageous for you, instead of you trying to defend yourself, to let such a representative speak on your behalf.

Sin is a capital offense punishable by death. It is written in the Code of Moral Law that governs the universe that the soul that sins shall die. And since all men have sinned, all are under the sentence of eternal death. (Rom. 3:23; 6:23)

But because of His great love for us, His commitment to justice, and His desire that we be represented by the best, our Heavenly Father appointed none other than His Beloved Son, the Lord Jesus, to be our Savior and Advocate before His Throne.

Listen to these wonderful words from Scripture.

“My dear children, I write this to you so that you will not sin. But if anybody does sin, we have an Advocate with the Father—Jesus Christ, the Righteous One. He is the atoning sacrifice for our sins, and not only for ours but also for the sins of the whole world.” (1 John 2:1, 2 NIV)

“Just as people are destined to die once, and after that to face judgment, so Christ was sacrificed once to take away the sins of many; and he will appear a second time, not to bear sin, but to bring salvation to those who are waiting for him.” (Hebrews 9:27, 28 NIV)

What an Advocate He is! He obtains a “Not Guilty!” for everyone He represents. He never loses a case.

Who is representing you before God? Are you trying to speak for yourself, or are you letting Jesus speak for you? He stands ready to plead your case, if you will only put your faith in Him.

← You Will Have What You Say
If Money Talks, What Is Yours Saying? →

3 Comments on “Who Speaks For You?”