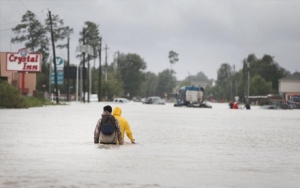 Hurricanes, earthquakes, floods, mass murders, terrorism.  So much suffering.  Why does God “allow” so much evil in this world in spite of prayers? Does prayer work?  Let me take a stab at it and see if it helps.

Secondly, God gave control of earth to man. “Let us make man in our own image and let them have dominion on the earth.” So for the time being, man, not God, governs earth.

And he also gave man a free will, which God treats as sacred and never violates. Unfortunately, on earth, where man is in control, and exercises free will, evil is rampant.

If we want to fault God at all for the sufferings on earth, we can fault him only for making man in his image, with a free will and with the authority to make choices that have consequences. We can fault him for not making us robots that had to obey him. But before we do, ask yourself, would you prefer to be a robot or a free man? Did God show love to you by making you free, or did He do you wrong?

Prayer is powerful, but we need to know its limitations. We cannot by prayer cause God to take away a person’s free will. God will never do that. He will never answer a prayer that turns a man into a robot who has no will of his own.  And free will would be a farce if God made it his practice to prevent man from experiencing the consequences of his choices, every time man chose to do something contrary to his will.

Nor will God reverse his decision to give control of earth to man because we ask him to. There is a moral contract, rooted in the integrity of God’s Word, and found in the creation narrative, that would make it “illegal” for God to revoke man’s right to earth at this time due to man’s poor choices.

We know from Scripture, however, there is a day appointed when the “contract” will come to an end legally. Then Jesus will take full control of earth once again, and at that time the lion and the lamb will lie down together.

Until then, we will have to live in and make the best of a fallen and broken world, which is the result of man’s evil choices, where wicked men use the power of their wills to inflict evil on one another, contrary to God’s will. And where “innocent” bystanders get hurt and killed. A world where nature itself has been drastically damaged by sin and now produces such things as hurricanes and earthquakes.

Let’s remember, also, Jesus never said that by prayer we could bring an end to all suffering and reverse the destructive impact of the fall upon earth at this time.  Instead, he said unequivocally, “In this world you will have tribulation.”

But he did not stop there. He went on to say to believers: “But be of good cheer, for I have overcome the world.” He was pointing to a time when death itself will cease to be. And suffering will come to an end. That will be when he takes back control of the earth. But that time has not yet come. It’s in the future. That’s our hope.

So my counsel is, keep praying. Know the possibilities of prayer. But also know the limitations of prayer, especially as it relates to things involving man’s will.

← Prayer Power
Win the War Before It Begins →

4 Comments on “Does Prayer Work?”